Yalama Bhutan Tours & Travel is the ghost company made by some officers of
the ministry of agriculture and forest in Bhutan. An officer called Tsheten does
conspicuous work such as tour guides, but a fixer is a high class official called
Tashi. When Tashi goes on a business trip abroad, he invites foreign researchers
to Bhutan for the cheaper travel expenses.
However, ｙou never get something for nothing.

Everybody knows it is forbidden for bureaucrats to make a personal company and
fill its pocket using power. At September 04, King Jigme Khesar Namgyel Wangchuck
came to Bumthang to join the opening ceremony of "the tour of dragon". We met a lot
of staffs of TV media and king aides at the restaurant and the bars in the evening,.
I was very surprised that our guide has so many friends and classmates among them.
They were about to know what Yalama Bhutan Tours & Travel is. Information of
Yalama will reach the ears of the king Wangchuck in the near future. 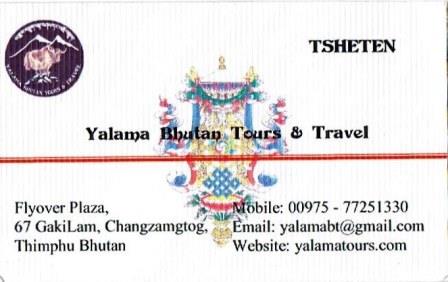